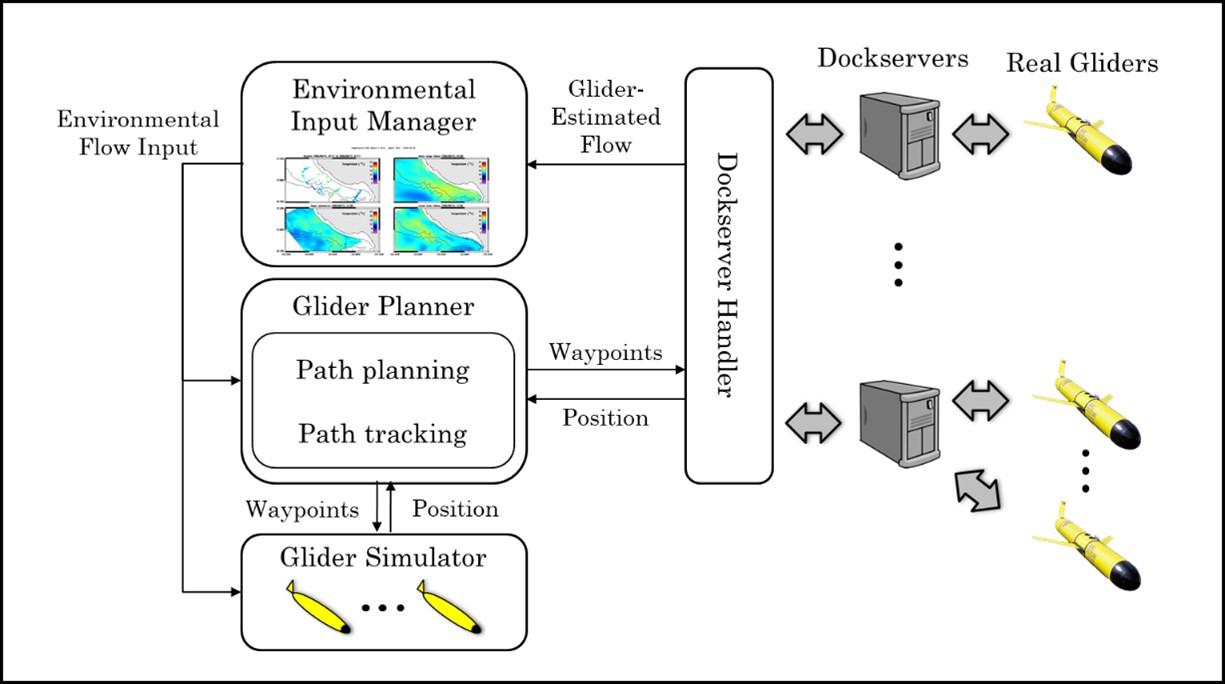 In the early 2000s, the concept of the Autonomous Ocean Sampling Network (AOSN) fueled interest in automated multiglider control systems. In 2006, as part of the AOSN field experiments, various research groups took part in the Adaptive Sampling and Prediction (ASAP) experiment in Monterey Bay, California. Paley et al. (2008) developed the Glider Coordinated Control System (GCCS). Feedback control in GCCS enables the automation of both individual glider navigation and fleet coordination. An individual glider navigates by simply following waypoints generated by GCCS in such a way as to maintain the coordination of a glider fleet along a sampling trajectory.

To support the Long Bay glider experiments under strong, highly variable flow, Chang et al. (2015) extends GCCS into GENIoS, which incorporates some major additional features that can process the environment information and can communicate with the glider dockserver.

The glider planner function in GENIoS designs the time/energy optimal waypoint sequences for the glider traveling in the estimated ocean flow field. GENIoS achieves such function by two components, the path planning controller, which designs the optimal path in the flow field, and the path tracking controller, which designs the lower-level control inputs such that the vehicle can follow the optimal path.  We implemented multiple path planning algorithms in GENIoS planner, such as the A*, the Level Set Method, and the Method of Evolving Junctions method. Multiple algorithms have also been implemented to achieve the path tracking control, including the flow-canceling strategy, the transact-following strategy, and the station-keeping strategy.

Fig. 4: Time-optimal path planned by the A*, Level Set Method and the Method of Evolving Junctions for glider deployment in Cape Hatteras, NC. More details in Zhai et al. (2019), and Hou et al. (2019).

The glider simulator simulates glider trajectory according to the 3D kinematics model of the glider and produces glider sensing and navigational data very similar to the data from the real glider. When GENIoS is controlling a real glider, the simulator obtains the real glider data via the dockserver handler interface. See Paley et al. (2008) for more details.

For the fast acquisition of the latest surfacing information and the fast transmission of waypoints, GENIoS incorporates the dockserver handler interface. It continuously monitors glider log files on the dockserver.When the latest glider surfacing information is reported on the dockserver, GENIoS obtains glider navigation-related information without waiting for the glider data files to be transmitted and processed, enabling as fast a waypoint computation as possible after a glider surfaces. The dockserver handler interface also enables GENIoS to transmit a waypoint list to a dockserver in parallel with the data transmission between the dockserver and a glider, enabling a seamless waypoint update. Moreover, the interface handles any data communication related to the status of a glider and its ongoing mission, enabling autonomous glider operation through scripted glider handling. Detailed information can be found at Chang et al. (2015)

Autonomous systems are required to be explainable to the human operators, regarding their behavior and how they operate. To make GENIoS decision-making explainable to human pilots, we visualize in real-time the GENIoS generated environment state estimation, the designed optimal control input, and the past/predicted vehicle trajectory under GENIoS piloting, such that the human operators understand what GENIoS can do and why it is doing certain behaviors.

Over the last ten years, GENIoS have supported many glider deployments in multiple regions, including Long bay, Cape Hatteras, and Gray’s Reef. One of the most recent GENIoS controlled deployment took place in Gray’s Reef National Marine Sanctuary. GENIoS autonomously pilots one Slocum glider, Angus, for a week consecutively, Nov. 18 – Nov. 25, 2021, without human intervention. During GENIoS control, Angus successfully fulfills the desired sampling task in the region of interest. Video of Angus’s trajectory under GENIoS control is shown below.

Lighter than Air: Fumin Zhang Group & Naval Research Lab Team Floats to the Final Round in the Defend the Republic Competition